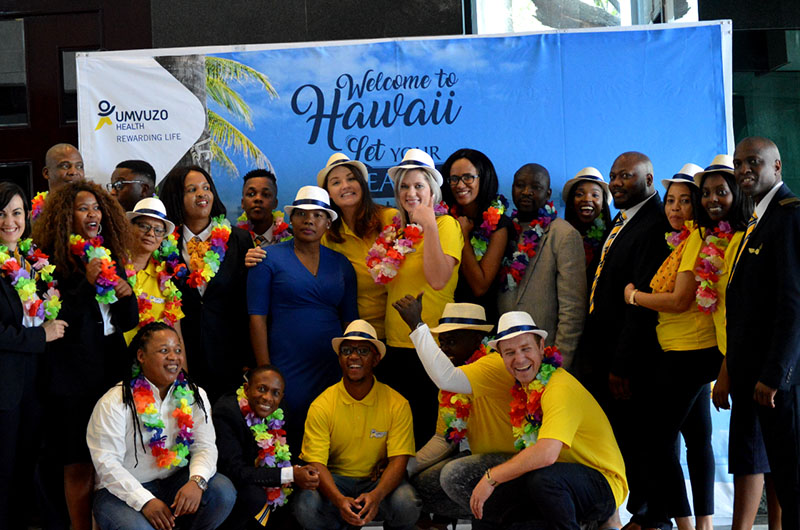 2 October 2019, the location was set for the 2020 Umvuzo Benefit Launch at Gallagher Convention Centre. However the location was unlike any other with the apt theme being, ‘Let Your Health Take Flight.’ The theme was pulled through meticulously from boarding, arrival, departure, to landing at a very colourful Hawaii! This being the 15th anniversary of Umvuzo Health saw the fullest “flight” since inception showing growth and prosperity.

As guests arrived, “check-in” commenced and guests were prompted to pose for “passport” photos before boarding “Umvuzo Airlines.” Guests embraced the theme and took their own role as passengers.

Welcomed by Hugo van Zyl, standing in for first officer Oosie Oosthuisen recovering from a minor procedure. Van Zyl then evacuated the cockpit for marketing manager Busi Roberts to take attentive “passengers” through the highlights of the year leading up to the 2020 Benefit amendments.

Roberts opened with the Scheme’s highlights since inception and the timeline of developments. Informative facts were relayed which included the astonishing number of corporate groups acquired since 2004 being 6 companies to 120 as the Scheme stands today. Another remarkable comparison was the contributions which were 9 million in 2004 and are projected for the first time to cross the billion rand mark.

“Climbing in altitude,” Roberts emphasised that in a struggling economic climate with many Schemes falling to the consequence, Umvuzo have kept growing. Option buy ups, meaning members upgrading their Options was another example of bucking the industry trend.

Roberts “cruised” into the stats mentioning the Scheme had grown by 9 376 principal members and a total of 12 025 beneficiaries in January 2019 beneficiaries and grown by an entire 30% with the industry growth not even being a percent. The Scheme now boasts astounding 75 000 plus beneficiaries.

Roberts said that with great highs, there come challenges. The Scheme’s growth put pressure on the reserves with the audited 2018 figures being at 35% as opposed to the current 28%. High cost claims of R500 000 and above, at 82 million rand and counting as it stands was noted, and that for members, this was good news as it shows Umvuzo is giving members cover when they need it most.

However, it was said that this does have an impact on the Scheme and its increases per Option. The focus for 2020, Roberts mentioned would be to have continued high service levels, aligning members with the correct Option, expand membership within existing corporate clients (as well as acquire new business) and to always make sure members get the cover they so rightly deserve.

The much awaited increases were announced being:

Roberts advised guests to fasten their seatbelts for the new increases for the next mentioned Options.

In totality this amounted to an average of 10.37%.

There was also excitement around the New News being maternity benefits including additional blood & urine tests, 2D ultrasounds, prenatal vitamins and visits to the GP/Gynecologist (benefits differ according to plan).

Roberts concluded by saying that the Scheme will continue to offer great value for money, listen to what their stakeholders have to say and to nurture their current relationships.

“Captain” (chairperson of the Board of Trustees) Frans Nkosi thanked guests for attending and shared his optimism for the coming year.

Back to Press Releases